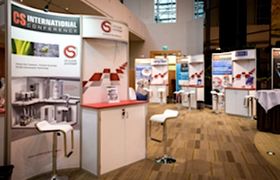 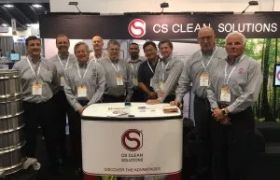 Much has been achieved since the foundation of CLANET Inc. in April, 2017. In June 2018, CS CLEAN SOLUTIONS sales and service partner for Korea moved into a new building in Yongin. The new facility includes office space and a 200m2 service area for the refilling and refurbishment of returned CLEANSORB dry bed absorber columns.

Situated within one hour’s drive from the major semiconductor manufacturing plants in Korea, the new CLANET facility in Yongin is ideally located to serve its semiconductor, photovoltaic and FPD customers.

With many years of experience in the field of dry bed scrubber technology, Refill Center Manager Mr. Kim says that the facility is well equipped to support the requirements of a HVM market such as Korea. Having visited the new center in August 2018, Silvia Sprenger, Head of After-Sales Operations at CS CLEAN SOLUTIONS in Ismaning, Germany, was impressed by the competence and motivation of the CLANET team and predicts a flourishing business in the years to come.

CLEANSORB® dry bed chemisorber technology is used to convert hazardous exhaust gases and liquid precursors from semiconductor processes to solid by-products. The scrubbing reaction is fully passive and does not generate waste water. Our customers avail of a worldwide network of local service centers for refilling of expended CLEANSORB columns.

For more information, visit our website www.csclean.com or visit CLANET directly at www.clanetc.com

CS CLEAN SOLUTIONS AG recently announced the opening of a new facility for the refurbishment and service of waste gas treatment columns. Opening of the modernized facility at its Ismaning (Munich) headquarters follows successful completion of a 12-month trial phase.

Unused process gases and hazardous by-products from plasma etch, CVD and similar semiconductor processes must be removed efficiently and safely from exhaust lines to ensure safety of personnel and compliance with regulatory emission standards. For over 30 years, users of the CLEANSORB® range of dry scrubber products in Germany, Austria and Switzerland have enjoyed a comprehensive maintenance package comprising a unique take-back and disposal service for the spent absorber material. Similar customer support is available in other countries through the CS CLEAN SOLUTIONS network of local service centres.

Expansion of the service centre at the Munich facility was necessary to increase throughput and keep pace with the steady growth in semiconductor research and processing in recent years, particularly in the III-V sector. The modernized facility has been re-built from scratch in a dedicated building which is equipped to the highest standards of operator safety and materials handling.
The CLEANSORB® waste gas abatement system removes hazardous process gases by chemical conversion to stable solids at ambient temperature (chemisorption). No external heating, waste water, or other facilities are required for operation. Hence, the CLEANSORB® system is fully passive, and is permanently on standby, even in the event of a power- or other facilities failure.

On Friday the 14th of October CS CLEAN SYSTEM AG celebrated their 30 anniversary and the inauguration of an additional building for the re-fill department.
Most international sales partners who had their annual group meeting the day before also took part in the celebration.

As representative of the municipality, Mayor Dr. Alexander Greulich addressed the good relations between the community and CS CLEAN SYSTEMS AG.

The next speaker, company founder Dr. Christoph Scholz, had many interesting thing to say about the company’s history.

After that, of course, there was a buffet and drinks. As well as some live music as background for many interesting conversations.

At the end of the party, every guest received a CS beer mug as a souvenir.

Last Tuesday at SEMICON West, the Facilities 450mm Consortium hosted a panel of representatives from F450C […]

In transitioning from 300mm to 450mm wafer processing, the surface area of each wafer approximately doubles […]

Another Success for Dutch MTB Team

This year again, our Dutch partners took part in the 6 hours race in Gulbergen in […]

EHS Compliance and Safety in Manufacturing: Does Silicon Have Some Catching Up to Do on Gallium Arsenide?

Over the past few decades, discrete transistors based on nonsilicon material regimes such as gallium arsenide […]

Service Training for our Partners in Taiwan and China

CS CLEAN SYSYEMS, Inc. is a member of the F450C and associate of the G450C consortiums […]

As a leading edge solutions provider for the abatement of semiconductor exhaust gases, CS CLEAN SYSTEMS […]

Service Training for our Partners in India and Russia

This year’s Service Training for our partners Aimil Ltd. in India and Sigm Plus Co. in […]

Training Session for our Partners in China and Taiwan

AIXTRON SE, the leading provider of MOCVD reactor equipment to the global optoelectronics, LED and semiconductor […]

Ismaning, June 2010 Learn more about the Safe Abatement of On-Site Fluorine Generators at the IHTESH […]

CS CLEAN SYSTEMS AG and SIGM PLUS Co. have signed a distribution agreement for Russia

CS CLEAN SYSTEMS AG has completed a distribution agreement with SIGM PLUS Co. giving SIGM PLUS […]

The potential advantages of Copper Indium Gallium Selenide (CIGS) solar cells have been widely reported, and […]